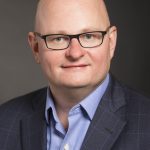 Alex Goryachev, Managing Director of Innovation Strategy and Programs at Cisco Systems, explained his company’s program to bring employees into the innovative process and build a sense of ownership.

“When we think about innovation, we talk about acquisitions and engineering, but, at the end of the day, everything comes down to talent,” stated Goryachev at the outset of the last keynote presentation of the day at the 2018 CHRO Leadership Forum held in San Francisco on November 7. “Venture capital has heard all the company ideas in the world. What gets you funded is who’s on your team,” he said.

“We all know why companies die,” said Goryachev, who presented a company organizational chart with titles such as “Chief Idea Killer,” “VP of Status Quo,” “Director of Onerous Reporting,” “Director of Analysis Paralysis,” and other humorous descriptors. “This probably looks painfully familiar,” he commented. “Companies go out of business for their failure to innovate, even though they had everything going for them. Blockbuster is a brilliant example—it had cash, it had a footprint, it had real-estate relationships with consumers and studios. It was focused on what it was doing and believed it was right. Its CEO stated to Motley Fool in 2008, ‘Neither Redbox nor Netflix are even on the radar screen in terms of competition.’ At the time, Netflix was trying to sell itself to Blockbuster. If Blockbuster had listened to its employees and its customers, I think they would have thought differently,” he said.

“We must urgently empower every employee to innovate and make a meaningful difference to survive as a company, and inclusion and diversity are essential for this. Innovation means making something happen, and making something happen doesn’t take a lonely innovator. It takes a team of people from different backgrounds with different beliefs and problems who find different solutions. It has to be a cross-functional team,” stated Goryachev.

“At Cisco, we drive innovation with HR, and it’s the talent managers and HR business partners that are making this happen. We redefined innovation by recognizing we have people with ideas and people who are supporting those ideas, so everyone has a seat at the table. We run a program to capture thoughts from employees from around the globe relating to innovation. Whatever an employee thinks is innovation is innovation—from shorter lines in the cafeteria to operational product improvement. In this way, we give employees ownership. We also connected employees to strategy. Most employees don’t know what our aspirations are, so we share these, and this also stimulates innovative input from employees,” he said.

“Lastly, we’re transparent. We publish comments on every employee idea and explain why it wasn’t chosen and what needed to be improved. We’re also transparent on the type of people we’re looking for. If an employee is willing to implement their idea—not just give advice to Cisco—we want to hear from them. Not only do we connect employees to strategy, but we align functions together, so they can talk about what their innovation ambitions are,” said Goryachev.

“We also created a publicly visible marketplace of ideas with a mentorship program on top of that. We connect employees with customers to present their ideas. This gives them extremely valuable experience. This is the easiest program for me to justify, because I can measure the impact of revenue and patents. We productize some of those ideas, and that leads to sales and relationships with those customers.”

Goryachev stated that, year over year, employees have maintained passion for this idea-sharing program. “We give them tools and allow them to take ownership of a big company. A startup is a team effort; a big company is a political process. When you give employees the opportunity to participate in that political process—no matter their position or location—that’s a wonderful thing. And HR is at the heart of it.”

Next Article:
JLL Global Treasurer Discusses How Finance Can Prepare for 2019